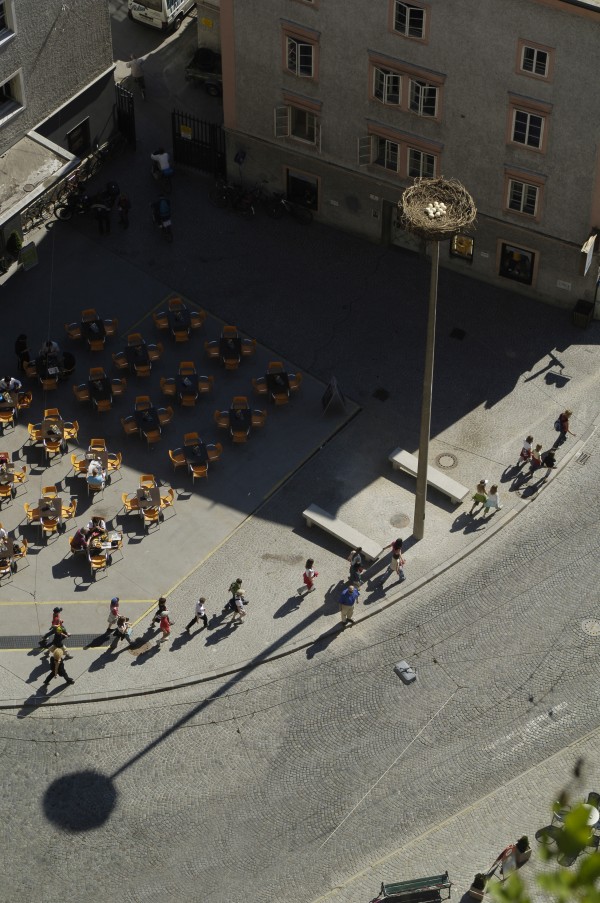 An “extraordinary” street lamp perfectly capable of functioning was installed on Anton Neumayer Platz. A platform was mounted on the lamp section at the top of the 15-meter high mast intended to hold a large stork’s nest. The clutch in the nest contained empty ostrich’s eggs. The lamp was lit during the day, but did not function at night. The clutch was visible from the terrace of the Museum der Moderne.

Johannes Steidl’s „ Laocoon’s Litter „. No Light on the Anton-Neumayr-Platz. Salzburg, 17.06.-27.10.06
Salzburg’s Summer Scene, which has been working on a project ironically entitled „Sex, Crime and the City“ this year, has also provided a field for fine art. As a visual marker and intended for public intervention, artists such as Lois Weinberger, Kai Kuss, Hans Kuppelwieser have already made their appearances under the curatorial aegis of the art collectorJosef Neuhauser. This year Johannes Steidl will reutilize the square with the monumental and yet almost invisible installation ”Laocoön‚s Litter“ . This consists of a 15 metre high standard street lamp with a 180 diameter platform fixed at the top of it holding a nest made of liana and ostrich feathers. An orange light glows underneath the nest throughout the day. The metaphors are visually unostentatious, in away easy to understand, a piece of civilization and a displaced piece of nature. Light. Yet, everything which may seem harmless and peacable on first view soon emerges as an ambivalent commentary and recalcitrant dispute with, on the one hand, the contemporary cultural players in Salzburg and on the other hand with the situation on a global level.

The contextual framework
The topological position and the social surroundings of theinstallation characterize a field where examples of contemporary life ranging from the festival to Red Bull present themselves, a culturally charged square, a culmination point, a hot spot in the city. We could even talk of a new village square where overlapping and contradictory practices take place. What is more significant is the ”multicultural“ utilization of the location, that is the heterogenous fields and interests debated in this local conflicting areas. the Museum der Moderne, opened in 2004, is located on the Mönchsberg, which rounds off this square. For Steidl, it is a place which administrates the past and its blockbusters and the Anton Neumayr Square below has in the meantime come into the years of the alternative youth cultural Summer Scene with its dance Theatre. Otherwise the bar, Republic, which is also located there, has become a milestone and the events hall is used for concerts and cultural events throughout the year. Alone the placing of the nest in no-man’s land between the ”non-space“ of up and down is a comment from Steidl about what is being debated in the present polygon of interests.

Disappearance and Appropriation, a Parasite.
The relative height of the nest at the club with it’s ready-made Character, makes sure that Laocoön‚s litter is not really perceived by many people. This aesthetic disappearance is intentional and a gesture of refusal concerning the visual element. ”Disappearing is the order of the hour“ says Steidl and implies a position of the glinting, smug artist who throws himself glamourously into the discourse of attention. Yet he not only celebrates this own ambivalence in this almost post-structural prime subject, he also wants it to appear prominent, to palm off the ”litter“, to creep in and dodge the fare – indeed during the „Kontracom 06“, a festival for contemporary art and music which ran in Salzburg’s old city centre from 12th May to 16th July and was curated by Max Hollein and Tomas Zierhofer-Kin. Visual art in public spaces was represented by ten international artists. Kontracom for the artists, assigned with the claim, meant representing public space now, a cultural transfer which was long overdue in Salbzurg and which was, nevertheless, quite simple in the way the ”drop sculptures“ were implanted. This means an exemplary impetus of how art and culture has always been debated in Salzburg was visible. It was dominated by the never-changing image transfer of a representative economical logic of protecting the highly cultural exceptional position. This appropriation strategy was similar to a subersive acquisition of symbolic art activity and curatorial capital which also actually paid off: „Laocoön‚s litter „ was identified with Kontracom by a lot of the media and also the general public.

Nest and Light
There are eggs in the nest and it is initially thinkable, hoped and expected that something will hatch out of them, promising new banks of life and the unkown. Yet, no sooner has this optimism set in, you notice that you have fallen into a perfidious thought trap and the mental backlash does not have any effect. You become aware that it is about ostrich eggs and ostriches cannot fly, it could never get up there so nothing can be hatched. It is a simple pragmatic impossibility per se and an illusion at the same time an. Yet there is still a further metaphor of hope, the light which could function as a hatchery heater or an accelerator of processes. Light, which is often understood as a metaphor of truth or enlightenment in modern paradigms. Light and sight, concepts which have been demystified for a long time and a code of an occidental brutal rationality and symobl of an illusion of power and control. With this theory in consideration, the light of 9.10 a.m. to 9.10 p.m. also burns, that is during the day i.e. when you don‚t actually need it, either up on the art mountain or down in the cultural square. This reversal and dialectic of light in this non-space exposes the positions of over and under, being on the edge, discarded, non-visible, a topic of debate and poses the question regarding the possibility of space beyond the known variables.

Ambivalence
A further central feature of the installation is the dialectic of the levels of view marked by its location. It could almost be seen to be trivial: what can be seen from above is not perceptible from the ground and vice versa. From below, the nest and from above, the eggs. Each opposing feature can only be imagined. For the artist, it is a one-dimensional possibility, the different levels are readable codes for the utopian formula of the multi-sided perspectives in philosophy and sociology and the simultaneous impossibility for the eye which can not see itself : An allusion to the view in relation to the location and the often fatal, humanitarian sociological consequences contained within it. Yet as a programme,
these levels of viewing are closely linked with a slip of the levels of perception and meaning which is like a self rotation and passing by of possible significance, which disintegrate at the same moment. This rotation of perspectives and meanings merely result in a certainty concerning the ambivalence of the present situation and the uncertainty within it. This is the point where the title, full of discourse and narrative, becomes relevant „Laocoons Wurf“. The theory of the fertile moments of Lessing‘s visual art which he wanted to verify through the Laocoon group is brought to mind. This means that the refusal of narrating the concentrated depiction benefits a significant moment that is to say what has happened previously can still be deciphered and what stands before can be surmised. This is the central question of the work: what these premises mean for the future or which possibilities and chances still exist in this cultural setting. That is to say what „opposing worlds“ in Salzburg in particular but also concerning civilisations and situations on a global level in general can still be articulated. He formulates in a pathetically existential way that „Is there something fertile still possible here in a sort of Franky boy „What a wonderful world“ way, or do these total social constellations mean the absolute blow of death of a culture?“ Yet in the next moment, sublime discourse, artistic gestures of prophets and warnings, ironic, existential statements and rejecting own semantic, he explains that he actually lives here and actually needed light for having a barbecue on the roof. this has a similar motivation such as placing a garden gnome in front of your own house with it there is a sort of accompanying cynicism but also the occupation of public space. By questioning the status of art and the significance of its own majestic dignity a possibility of providing a meaning in the area of natural history , the nest could be read as an advertisement for the closely located „Natural Museum“ or, with a little bit of imagination, as a refusal of anthropocentrism and with it beyond the human authorship it could be imaginable that birds a have simply made themselves at home on top of the street lamp. However, these are programmed mis-understandings, mind you, not in a hermeneutical way but thought as post-structural premisses of constructs of significance where the sense floats freely. The steidler game invites you to experience the irony of meanings not only the one and often ordered meaning renews a basic and more frequent distrust but at last another own assuredness, an own train of thought and this with epistemological and power theoretical justifiability.