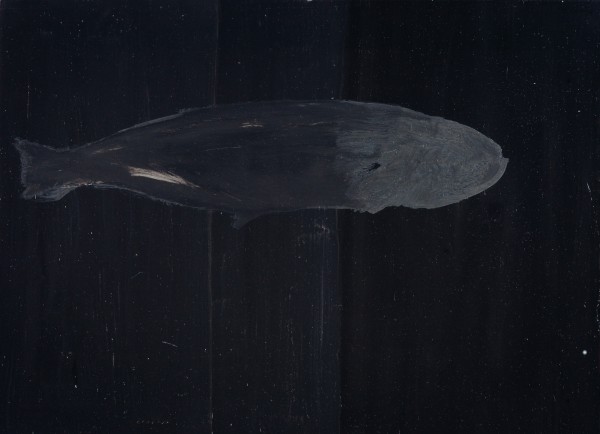 Seeing in Silence
On animals, Berbers and stoves
Peter Truschner

What is it about the animal figures that have recently been populating Johannes Steidl´s works? Be they birds, turtles, hares or fish, they are everywhere, yet peculiarly intangible. They don`t hibernate, don`t crawl ashore to nest, and don’t fly thousands of kilometres to far-distant winter habitats. They`re not illustrative, nor do they graphically embody human intentions or actions. They have as little to do with hunting as they have with the themes of vegetarianism or intensive livestock farming. In Steidl`s case, making art-historical interconnections is a difficult and ultimately jejune undertaking. When Franz Marc writes, “When I was very young I thought man was `ugly`; to me, animals seemed more beautiful, purer, but in animals too I discovered so much that was repugnant and ugly that my portrayals became instinctively (due to an inner compulsion) more and more schematic, abstract” (1), his words express a complicated moral and aesthetic judgement on animals and man that Steidl might find abstruse, although a link between ethics and aesthetics is by no means foreign to his work. The dual role, adopted by the artist Beuys, of shaman and advocate – “trees, animals, everything has been deprived of rights. I would like to gain legal capacity for these trees and these animals. That is a self-evident duty of man” (2) – might have a certain appeal for Steidl, but he still distances himself from it in his own work.

Steidl`s hare is a pronouncement on its running movements, an electrified outline that vanishes along its contours. The turtle is simply just there. Its large presence could fill a whole hall without us learning anything more about it, other than the fact that it exists. Black fish almost dissolve in the, for the human eye, impenetrable darkness of the sea`s depths. But why? And for what purpose?

In raising these questions we open our minds to the game Steidl is playing. The irritating thing, however, is that we are not explicitly invited to take part. There is no formal opening of the game, and also no obvious end to it. The rules of the game may take the respective conditions into account, but they actually never change. If we decide to become involved, we soon realise that we have long since been embroiled in it. In this moment of self-knowledge we may possibly feel as if scales have fallen from our eyes, or else we may continue on with a shrug of our shoulders, because the ostensible has long since become inevitable. Johannes Steidl`s paintings and drawings have always contained pointers to phenomena, facts, discourses, yet without ever becoming a reference or even an accumulation of citations. He lays tracks, leaves traces with which one can orient oneself in the broad terrain of one´s own experiences, as in the thicket of discourses. In doing this he resists the temptation to set traps. That would also be counterproductive, as the game in question can help us become aware of the trap we are already in, the biggest problem being that it is disguised in the mask of self-evidence. (1) A considerable amount of the information and communication that make up our everyday life serves to provide a structure for our thinking and speaking, out actions and judgements, meaning also a perspective and direction whose contradictions can still be reconstructed. People seek orientation, the sceptic as much as the positivist – a fact that makes clear messages and obvious borderlines very popular. It is no minor risk, therefore, when an artist evidently leaves open questions regarding the content and purpose of his work, and also doesn`t manipulate these so that they impact like a particle accelerator, so to speak, unleashing a huge variety of associations and interpretations. Instead of offering the viewer a space for associations, Steidl holds up a mirror to him, and so throws him back on himself. He reveals the alleged lack of orientation and context in his work to be a reflection of the viewer`s tendency to orientate himself, to categorise what he sees, before getting involved at all in the act of seeing. (Which at once hints at the disadvantage inherent in Google and Wikipedia, apart from their undeniable advantage. In connection with a trip to Morocco, Cees Noteboom realised in retrospect: “I was still unencumbered then by any knowledge of the Berbers, I just looked. Now that I know more about them, as usual I know less …“(3) )

Who is still able to endure just a solitary line, or a prodigal splash of colour on canvas? Who does not speculate that something more exciting, or simply more entertaining, could be waiting for him somewhere? The individual image, indeed painting as such, seems to be disappearing in view of the historical, political and media narratives that infiltrate and subvert it. The discourse prefigures the association, which in turn impedes, if not blocks, the imagination. Yet Steidl is not making a case for the value of ignorance or a lack of education, nor is he dreaming of some primal state for the imagination. He is merely drawing attention to the fact that a concrete, a relevant context is not necessary in order to  confront an image or be able to speak about it. To cite Noteboom again: “The shock of the completely unknown consists of quiet delight. If you can’t take part, there`s a lot you can just leave at home. Your own masks don`t count here. In the eyes of a Berber … you could just as well be from Ohio, meaning that the many nuances you have made a great effort to acquire are irrelevant.” (4)

When Steidl confronts the viewer with his preconceived opinion, the nature of his expectations and his largely unacknowledged aspiration to be informed and entertained so as to be able to take part in the talk without further ado, the game he is playing with the viewer becomes a narcissist humiliation, albeit with therapeutic aspects. These therapeutic implications, however, have nothing in common with medical or psychoanalytical therapies, as they lack the procedural and normative features of those treatments. If at all, they slightly resemble Wittgenstein`s aim to thoroughly probe supposed matters-of-course and naturalised, so to speak, habits, as communicated through language. In one of his letters Wittgenstein makes a statement about his Tractatus that might well be a suitable commentary on Steidl`s approach: “What I wanted to write was that my work consists of two parts: the one presented here, and all those I have not written. And it is this second part that is the important one. … In brief, I believe that in my book I have defined everything that people babble about today by remaining silent on it.” (5) (Perhaps Wittgenstein would be the ideal viewer, in Steidl`s  sense.) “If I have been contemplating the stove and am then told: but all you know now is the stove, then my result would indeed seem trivial. For this presents the matter as if I had studied the stove as one among many things in the world. But if I was contemplating the stove, then it was my world. And everything else palled by contrast.” (6)

For a long time Steidl`s painting prowled the gestural and mimetic area of the human body. But the body is surrounded by an invisible wire fence, it tarries in the sphere of the human. Even where it involves something esoteric, it is inherently familiar. By contrast, the animal remains something alien, apart from the house cat and the milk cow. It really only exists in the context of human volition, man`s meaningful contexts. By deliberately refraining from creating any such context, and by keeping his calligraphic translations onto paper or canvas indeterminate, Steidl uses the animal as an ideal medium for his decontextualisation, a kind of clearing-out of all the rubbish accumulated in the mind with a view to smoothing the way for a contemplation that is as unintentional and pointless as possible.

Johannes Steidl`s work is indebted to enlightenment, not apotheosis. Its impact is more disenchanting than enchanting. It evokes asceticism in an era of delirious consumerism – another reason why we follow him along his way gnashing our teeth rather than strewing flowers. The questions he raises may almost be as old as painting itself, but they have lost nothing of their validity and significance. Over the course of time, painting has repeatedly seemed to be at an end. Much more often however, that end has been treated as a foregone conclusion. So what Boris Groys claimed about philosophical questions also applies to aesthetic issues: they never come to an end, they are never resolved, and one is also never delivered from them.